End of an Era

Today is a landmark day in the field of technology advancement.  For by the end of today, the last of the analogue television transmitters will be shut off, meaning that the 5 year changeover to Digital will be complete.

But interestingly, it also marks another landmark, for analogue carried something else alongside the television pictures and sounds that we all enjoyed. It also carried a teletext service. 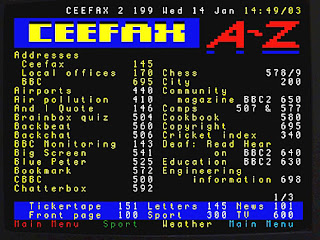 ﻿
Ceefax was launched in 1974 and was the worlds first teletext service.  Containing graphics and text it rotated on a sequence of pre-delivered pages and you could get News, Sport, Recipes and Holidays to name just a few.

The system was fast, but limited because of it's "one way" delivery. This was challenged when the Internet became more popular, and people would only use it to check the football scores while visiting the grandparents!

Now replaced by "the red button", the digital service is able to offer a lot more, including additional video content and information to make the viewer experience more enjoyable.

So we thank you Teletext, we thank you Ceefax, for bringing on tap information to the masses.  We will miss waiting for the scrolling pages to bring us the news we want to read. Silently you will disappear as the analogue transmitters are finally shut down.

And as you take a bow as the final curtain closes, please make sure you don't get run over by the super fast broadband as it whizzes past.

Which came first, the Mobile or the Child?

Indeed that was the question that almost got answered in a lethal way earlier as I drove back from picking up some shopping.

A young woman, busy texting on her mobile, pushing a buggy with child in front of her, started crossing the road in front of me without looking.  Thank you Saab for your Anti-Lock Brakes. And sorry that my horn woke your sleeping baby.  I guess we should be glad that it did wake up. A few more feet forward and it wouldn't have anymore.

Quite a dark start to any blog about technology, but in a grim way explains a fundamental problem that society is having with the advances that technology provides.  It seems that technology is trying to become first in our lives instead of the more important things.

Will technology ever become the death of us, so to speak?  Continued reliability certainly gives strength to that argument.  Anti virus software company's are getting increasingly concerned about the extent that a virus could cripple society.

Let's not get to distressed and abandon all hope in technology, or shun it to an extreme that we dismiss it for a horse and cart, but let's keep it firmly in it's rightful place, use it as the tool it's designed to be, and keep our real life ahead of us and focus on the more important things.
Posted by MC at 13:59 No comments:

Shh, It's A Secret

I am about to tell you a secret. I could be struck off the I.T. Circle for this, so keep it quiet.

If your favourite IT geek has ever looked at your PC and made some profound comment about it still processing, or stated categorically that it has crashed, he is not The One. He cannot see into the PC and see it like the Matrix. He is looking at the hard drive light.

Most PCs have at least two lights on the front. One is the power light, the other is the hard drive light. It lights up any time the hard drive is being accessed. So when your first turn it on, you should see the hard drive light go nuts. It's also likely to happen when you open a program, particularly large games. It will also happen if you're not running much memory, as we have discussed previously.

So although your PC may seem to take just a minute to boot up and make the desktop available, it may not be ready to start processing straight away. Look at the hard drive light and you may notice it stays on almost solidly for several minutes after the desktop has appeared. It won't be ready to proficiently process data until the light has almost stopped, or is at least only flickering occasionally. If your waiting for a program to open or process some data and it appears to be taking its time, it may be worth checking the status of the hard drive light. If it's solidly on, it may well be processing a significantly large amount of data. However, if it is permanently on for several minutes it may have crashed. There is no substitute for experience in this area, hence us geeks are still valuable. Phew!

So now you know. I now have to change my name and address for safety reasons.
Posted by JK at 12:38 No comments: